Ah, the sweet taste of an overpowered protagonist. No matter what genre you’re in, nothing beats the main character who can decimate armies, slay demons, and save the world with a single swing of their sword. The best fantasy action anime effortlessly captures this feeling with an OP MC, a character who can do just about anything they set their mind to.

Whether they’re a magic-wielding wizard or a bloodthirsty demon, these 10 anime have the strongest protagonists that action fantasy anime has to offer.

Here are the 10 best action fantasy anime with OP MC

In a sea of fantasy and action, it’s fun to find an anime that focuses on the ordinary guy with extraordinary powers. Of course, it helps when the protagonist is a badass too. Anime can be fun, but it can also be hard to decide what to watch next.

It can be tough deciding between all of the amazing anime out there, but we have the answer for you. If you are looking for action fantasy anime, then here are the 10 awesome action fantasy anime that will blow you away and make you want to keep watching all through. Hopefully, this will make it easier for you to decide.

Japan just can’t stop surprising us when it comes to its ability to earn anything animate or animate to waifu material. This anime isn’t any different as it manages to transform one of the most fearsome and powerful beings and myth into a cute seemingly harmless lowly. Don’t be fooled.

However, this lowly has an attitude bigger than her and instead of being an obedient servant like all the other dragons, she’s actually claiming that she’s the master and Ash is the servant. Looking for action fantasy anime with a pinch of comedy then this is the anime for you.

Back to the good old days of the old school anime were some of the shows that I grew up on as a child. Orphen, which is also the name of the MC. It’s a story of adventure, love, and mutual respect that the MC has for his academy.

Azalie, the girl that was transformed into an evil dragon and the elder magicians didn’t bat an eye for. Angered by their attitude toward her circumstances, he left the magician’s tower in search for a way to save her and release her from that form she’s in. It’s an anime series that you should definitely be checking out.

Cecily Cambell is an aspiring swordsman dreaming of living up to the legacy her family have been holding for ages as the protectors of the city.

Having inherited her father’s sword, she fails in her first fight against an overwhelming crazed foe that shattered her blade and just as she thought it was her end, Ainsworth the sacred blacksmith, jumped into the fight, broke his sword opponent’s sword in half and saved Cecily only to disappear as quickly as he appeared in the first place.

This encounter marks the beginning of Cecily’s mentorship under the sacred blacksmith himself. It is a well written adventure show and definitely worth a watch.

07. Rokka: Brave Of The Six Flowers

From a skinny weak child into a powerful skilled fighter that can take on a complete battalion, that’s a hell of a transformation, don’t you think? Not only that, he’s then chosen as one of the six heroes that will free the world from the threat of the demon lord threatening peace. H

owever, when the time comes, and the heroes gather together, they’re seven instead of six. This leads them to conclude that one of them is an imposter and the call falls on our poor MC. Now, he has to evade the attempts of the other heroes to bash his skull in a while trying to find out the truth and reveal who the real imposter is.

So, who do you think the imposter is? Watch the anime and find out.

The series is about a boy named Bell that dreams of becoming a dungeon raider. With his ability to learn, adapt and level up way faster than anyone around him. He’s able to rise through the ranks and attain the title of a little rookie as his first step into becoming a powerful dungeon raider.

Even though he faces a lot of obstacles in his way, he isn’t going to give up his dream anytime soon. This series title might not seem like much for someone, and I think that it’s just another boring, sleazy harem anime, but in reality, it’s actually enjoyable and fun to watch.

If you enjoy magic school animes, then do yourself a favor and check out Is It Wrong To Try To Pick Up Girls In A Dungeon.

This is one hell of a complicated show. It would be better for you to skip this one for those who don’t want to bother and scratch their heads a bit. The manga is amazing and the anime is even better, but it’s a complete fiesta of mind rape and have you saying 90 percent of the time wait, what, how, who.

Still, overall, it’s so fun and enjoyable to watch with lots of fairy tale references like Cheshire and Alice and much more waiting for you. This rabbit hole is deeper than you think, and once you dive in there, there’s no going back.

I would love to recommend this show if you are looking for mind-bending action fantasy anime.

His parents signed a contract with the goddess to isekai, one of their children to her world someday, and in return, she will bless them with immense powers that will help him traverse this world he’s in.

The goddess, a superficial snob, ridicules the hero and treats him disrespectfully to the point she refuses to bless him and throws him off to the edge of her territory, which is practically a barren dead land.

While he descended, the best boy Tsukuyomi blessed him and gave him a part of his powers. Claiming that even without a blessing his inner power is way stronger than what he thinks. This is one of my favorite isekai anime series of 2021. A beautiful adventure isekai anime with a touch of OP MC.

Before the story of Aladdin and Alibaba saw the light, we were introduced first to the story of Sinbad since he was a child and how he rose to power to create his beloved Sindria as well as the alliance of the seven seas. This story tells the tale of all those and how he was the first human to ever complete a dungeon and receive a gin equip mind.

I tell you that he doesn’t just have one gem equipped which is a feat of its own. He has seven of those, each with a power stronger than the one before it and with his signature one being the armor of thunder and his attack Bararaq Saiqa.

The series is hard for beginners to pick the right one because of so many spins off and when you finally decide to pick this series, be prepared because the journey will be full of roller coasters.

Who would have expected that an anime about a guy with a lizard head that munches on other heads would be such a good anime? Well, certainly not me. Especially including the fact that it’s CGI.

However, this series crossed all my expectations for it and went even beyond. At one point even though the story might seem straightforward with the MC trying to find the guy that cursed him into this form. The world-building and the art style were actually amazing as well and quite enjoyable if I say so myself.

You can’t miss out on this show and you got to watch it. Trust me, you’ll regret not watching this one.

Back again to our beloved samurai demon slayer Hyakkimaru. Since the day of his birth, survival wasn’t written for him in his stars but Hyakkimaru wouldn’t have any of that and even though his father sacrificed his own son’s organs and a demonic ritual for power.

Hyakkimaru fought back the cruel fates and survived to the point he even was a grown-up that could manage on his own with prosthetic arms and legs for limbs. His life wasn’t an easy one and no one thought he might live that long to the point that he went off to hunt the same demons that robbed him of what he owns, and with every kill, he retrieved one of his stolen organs.

This is a tale of a lone survivor who fought against his destiny and fate, carving out his own path with his own two hands. If you haven’t watched this one yet, then do yourself a favors and go watch it right now. 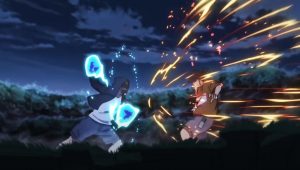