The Japanese have a word for it when they want to appeal to a male audience. It’s called “fan service,” and it’s when a show or movie includes gratuitous shots of women in revealing clothing or poses to get the blood going.

Some of the best anime of all time have been guilty, from the numerous shots of women in high-cut shorts and tight pants to the gratuitous shots of panties. If you are looking for fan service anime, then we bring you the 10 best anime with fan service.

Here are the 10 best anime with fan service

Keijo is an innovative sports anime that features a rather intriguing sport, and first of all, only girls can partake in this sport. Why? Well, it’s because of the nature of the sport. From start to finish, the girls stand on a circular platform and use every ounce of strength they have to knock their opponents off the platform.

Though there is one rule that they absolutely cannot disobey, they must only use their oppai or butts to fend off against their opponents.

Sounds simple, right? It’s not. You’ll see how these girls’ mental and spiritual limits are tested in addition to their physical limits.

Here we have a rather interesting scenario going on. An average high school student named Kimito Kagurazaka with his not so average fetishes. He somehow ends up in a prestigious school that is primarily for rich girls. The academy wanted the girls to get a little better at socializing and the first step they took was introducing a normal, somewhat typical boy into their ranks.

He is kind, compassionate, and loves to cook. However, there is one more thing that was the deciding factor in him getting admitted to this university.

He fooled everyone into thinking that he had a thing for muscular men and while everyone was under this assumption, Kimito was playing 4d chess. He got admitted into an all-girls prestigious academy. Nah, I’m just kidding. Our little protagonist can’t be sneaky, can he? In reality, he was abducted into attending the school. Talk about lucking out.

Japan lays down the foundation of integrating non-human species into human society and just like that, cute, charming, and seductive monster girls come crawling into his life.

Would you want your daily life to be around charming, alluring and seductive monster girls? Well, our protagonist Kimihito Kurusu gets to have this life. He is put in charge of a lamia named Mia. Little did he know it was just the beginning. Before long, he’ll have a harem of these girls.

Of course, it is important to point out that it is illegal to have sex with these girls.

Nisekoi is an anime that triggered countless waifu wars within the anime community. While the bloodshed was unavoidable and even if this anime isn’t critically acclaimed, this story will always remain a gem and I say this about both the manga and the anime.

The story itself mostly revolves around a young boy named Raku Ichijou and the girls associated with him. He has a whole harem going for him without even really noticing, which is understandable. I mean, the guy can cook.

Anyways, all the girls have their distinct personalities and if you aren’t forcing yourself to watch it, you’ll find them genuinely pleasant and the anime will be a memorable experience.

Minato Sahashi is an intelligent but unfortunate individual who ended up failing his college entrance exams two times in a row and as you can expect, his peers or society, in general, started seeing him as a failure.

What will his future look like? Though all of these unpleasant thoughts automatically fall into oblivion when an extraordinarily beautiful girl falls from the sky and comes into his life. This woman is an extraterrestrial being fully capable of performing supernatural abilities.

She looks at Minato, sees something in him, and then kisses him. Just like that, this kiss drags him into a world he could never even imagine. Had he passed the entrance exam? Watch the anime and find out.

To put it simply, Food Wars is a series of endless badassery and some seriously spicy ecchi scenes to go with it. This anime pulls off fan service in a bold yet bizarre yet understandably creative manner.

The protagonist named Soma Yukihira is a real passionate man. He has some really gigantic balls. He is someone who’d smile in the face of sheer talent just by hard work, intuition, and the commitment to keep on improving.

This man trenches forward to uncharted territories. Even Food Wars is naughty, but it is also badass and inspirational. If you want to see your blood pumping, give this show a watch.

Golden boy is a six-episode long OVA series that somewhat follows the episodic narrative and takes you on plenty of fantastic adventures. The main character Kintaro Oe is a master of working part-time.

He transverses the many highways of Japan and is always in search of employment and whenever he finds work, he tries to learn things that he could never have learned in the classroom. It drastically broadens his horizons and exponentially increases his skill set.

Now each episode follows Kintaro doing a different job and while it is indeed educational, the classic ecchi comedy of the 90s makes the experience just all the more fun to watch.

Kill La Kill is yet another bold series that uses fan service to its advantage. It goes like this, the more you strip the stronger you get. Of course, it’s not as simple as that you know.

The story follows a young and cute girl named Ryuko Matoi who has been wandering around in search for the man who murdered her father.

There will be plenty of mysteries to uncover, plenty of relationships to forge, and plenty of battles to win. Overall, the fan service and Kill La Kill are a gift to us.

The Nisemonogatari series is notable for the uncanny way it uses fan service. It is never really just fan service, its characterization and there is always some carefully crafted context, a deeper meaning behind the fan service, or at least that’s what the Monogatari fan base likes to say.

Tell me guys, is it true? Share your thoughts in the comment section down below. What do you think of the manner in which fanservice is portrayed in this series?. It’s the installment that features the infamous toothbrush scene, which I am sure even those who haven’t watched the series are already familiar with.

I’d say the entire Monogatari series is a poetic and rather surreal experience. Definitely, a must-watch if you are open to long strenuous dialogue between several true characters.

Prison School is a dangerous anime. It’ll destroy your stomach and the philosophical messages will keep you awake at night. The story takes place in a high school where a certain prestigious all-girl high school suddenly decides to go Co-Ed.

Five dudes end up enrolling in it and are instantly taken over by the boys to girl ratio and it’s one to two hundred. All of them are daydreaming about the rose-colored life they’re about to experience at this academy.

However, when on the very night itself they try to take a sneak peek at the girl’s bath. They’re caught red-handed. The student council president puts them all behind bars and from there on out, nothing but severe torture, humiliation, and a few glimpses of the vice president’s oppai’s awaited boys. It’s going to be a fun year, right?

You can also visit here if you are looking for more anime with fan service.

Do you agree with our list of the 10 best anime with fan service? Tell us your favorite anime in the comment below. 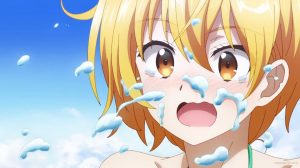 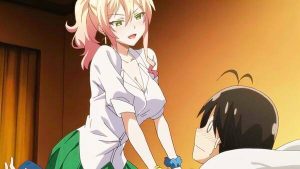 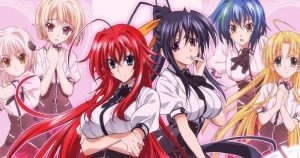