Romance and ecchi go together like peanut butter and jelly, and these anime prove that you get something pretty darn delicious when you mix the two. From high school romances to steamy hot night sleep, these are the top 10 ecchi anime with romances that are sure to get your heart racing and your palms sweating.

Ecchi anime are known for their sexually suggestive or explicit content. But some anime contains romantic elements as well. If you want to discover some of the most romantic ecchi anime, keep on reading! We’ve gathered the top 10 ecchi romance anime for your viewing pleasure.

Shocker right, clearly this isn’t one of those shows where you can share with others that you watched and just in case, watch it at night when everyone is sleeping and make sure those headphones are plugged in.

In a world where the humans, demons, and gods learn to coexist instead of fighting among themselves like cats and mice, the leaders of the god clan and demon clan decide to move into the MC’S neighborhood and live next to him and make his life a practical living hell.

This anime has all the cliches and tropes you might think of in a harem anime. However, the execution of the scenes and the way they’re directed will have you laughing your head off.

It’s rare to find a high school student whose dream is to have schmecks with 100 students before she completes high school. Energetic and enthusiastic about fulfilling her dream, one problem though she’s a virgin and has zero experience when it comes to guys, which made her refuse multiple advances from guys on her first day, while not knowing the first thing about dating.

In a school made for Yukai and monsters that take on human forms and strictly forbidden for humans to enter unless they have a death wish since they’ll be killed on site. A human student has been admitted to this school as a last-ditch attempt, thanks to his shitty grades.

On paper, this show had a great story and idea. However, it was transformed into a cluster shit of fan service in execution. Honestly, you’re better off checking out the manga.

Lots of responsibilities are thrown on the MC’S back as he tries to find a way to make it to the deadline of his game release with the help of everyone in blessing software.

The MC is the main point of the show and all the lights are shed on him as well as all the girls as this is a typical harem show. However, this series doesn’t fall into the generic trope and instead carves its own path into being an iconic fun and cliche-free harem.

It had some of the usual cliche tropes, but it wasn’t anything too major to the point you cringe at it, which was fine too.

“FBI open up” or just wait for a second no false alarm guys, she might seem like a lowly, but she’s actually 19 years old. The creator of this character wanted to bait many people into falling for her lowly appearance, I bet and what of those weird disproportionate dimensions she has.

The plot is strong in this one, don’t you think, guys. You can go ahead and enjoy watching this ecchi anime. Just a word of advice be careful if you’re being watched.

He just wanted to confess his love to one of his classmates, that’s all. The next thing he discovers is that he’s groping the boobies of a naked girl that crash-landed in his bathtub, who is actually an alien princess.

If you’re looking for laughs, then this anime is the best way to find him. You’ll be sent off on an endless roller coaster of laughing and giggling. It’s quite enjoyable and you’ll like it so go ahead and watch it if you want.

What could spell anti-social more than a guy that keeps to his own, stays by his lonesome, owns a cat, and is obsessed with zombies.

After the death of his cat in an accident, he tries everything to create a potion to resurrect it. Accidentally caused the neighbor’s girl to drink the potion he made, and even though at first nothing happened after the girl died, she was instantly resurrected as a zombie.

How will he learn to cope with the new changes with his dream of having an undead girlfriend becoming a reality?

Wait, what? He has blonde hair and an intimidating expression. Oh crap, he’s a violent delinquent stay away from him. That’s what happened to the newly transferred Kodaka Hasegawa in his new school, and just like that, he became the most shunned out student there is.

A month passes, and he meets another loner by the name of Yozora and together creates a club for outcasts like them to learn how to form friendships and such. One thing they miss though the arrogant Sena Kashiwazaki and how she’ll flip their lives upside down.

This is an uncensored anime with a lot of panties and naked girls either on the beach or bathtubs and a lot of boobs like hell, you’ve been warned.

With spring right around the corner, all the student’s hormones and sex drives go into overdrive mode with couples left and right.

The desperate virgin MC, which is also half the watch of this anime, is trying to do all that is in his power to find a girlfriend after being teased and ridiculed by his friends, only to confess to the busty Yukana Yame. A student in his school that well, let’s just say she is energetic.

The anime offers a lot of scenes locked in the MC fantasy of having sex with his hair and entourage in weird places and circumstances. One redeeming factor about the bland entourage harem characters is their freaking massive watermelon size oppai.

Other than that, they’re as bland as they come and of course, no need to forget about all the harem cliches since the directors didn’t forget and added a plethora of them.

If you want more ecchi then you can visit here

Do you agree with our list of the 10 best ecchi romance anime? Tell us your favorite ecchi anime in the comment below. 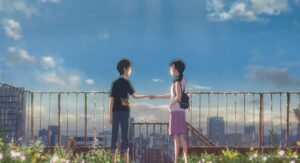 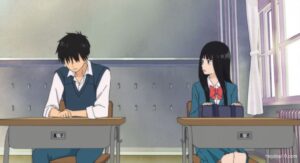 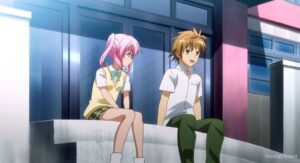