Here are the 10 best manhwa or manhua with Badass MC

From the most popular manhwa/manhua series to the most obscure, there is no shortage of manhwa that feature main characters who are stronger. The phenomenon has become so common that it spawned a whole manhwa genre based on badass main characters.

If you wanted to read about the main character that was so powerful or badass that nothing could stand in their way, then here are the 10 best manhwa/manhua with badass MC.

Chen Pingan was a commoner who was transmigrated to a cultivation world with no spiritual roots. He obtains a system, but it does not allow him to advance until he has completed a thousand missions.

He always assumed he was a model, but he had no idea he was a truly powerful person regarded as elder by every other cultivator in that universe.

Both the art and the story of this manhwa are decent. The main character is overpowered but he isn’t aware of it. The side characters are not written that nicely but the situations that they and the main character create are very funny.

So, if you’re looking for a cultivation manhwa filled with comedy scenes, this one definitely won’t disappoint you.

Manhwa Where MC Reincarnated In a Weak Body

09. Transmigrating to the Otherworld Once More

Sung Sihan, the main character, was an ordinary youngster who was sent to a foreign realm as a hero in order to overthrow the oppressive monarch.

He decides to stay in his present world after finishing his mission, but his happy ending is ruined when he is betrayed by his allies and is forcibly returned to Earth. Nevertheless, he returns to this world ten years later, determined to seek revenge.

The art of this manhwa is good and its story is also quite decent. The main character is overpowered right from the start and defeats all of his enemies with ease. The side characters are not that great but the fight scenes are well-drawn and thrilling.

So, if you are looking for a magic world manhwa, you can try this one.

08. My Wife is Actually the Empress

Li Yun, the main character, was resurrected into a game world. He joined the rebel forces, and because to his abilities, he quickly rose to the position of captain. Two years ago, he ruled the globe as the strongest man.

He now lives in peace with his wife while keeping a low profile. But he had no idea that his wife was actually the new empress and that the rebel troops he had left would soon rise once more.

Both the art and the story of this manhwa are good. Rather than action, the plot is mainly focused on comedy and romance. Both the main character and the female main character are funny and both of them try to hide their identity.

Peace and order were finally established on earth after the appearance of the deity of justice, Leto, or at least that is what everyone believed. Teo was one of many individuals who believed in this falsehood, but the real reality came to light when he witnessed his beloved being murdered by an angel that served the god of justice.

He makes a promise to use the strength the god of darkness has given him to take revenge and slay that angel. Both the art and the story of this manhwa are good.

The main character is dumb at the start but goes through character development and turns into a badass. The side characters are well written and the fight scenes are also quite decent. The ending was a bit rushed, but this was still a pretty good read and I’ll highly recommend you to give it a try.

06. The Strongman from the Mental Hospital

Lin Fan was a mentally ill prisoner who lived in a scary world filled with terrible monsters who go on rampage and wreck havoc.

Later, after electrocuting himself, he receives a system that allows him to grow stronger and become so powerful that any monsters that come near him are either reduced to ingredients or made into pets. Both the art and the story of this manhwa are quite good.

The main character is weak at the start but turns overpowered after a few chapters. The best part about this manhwa is its comedy. Most of the situations in this manhwa are funny, and the character’s expressions are hilarious.

05. Adventures of an Undead Who Became Paladin

This manhwa narrates the storey of an undead skeleton who was caught by a powerful lich previously. He escapes the lich and later becomes inspired to become a knight in order to travel the path of light while keeping his identity hidden.

This is a very underrated manhwa. The protagonist is strong from the start and he’s also very funny. He’s loyal and fights his enemies to death.

Unlike many other manhwa, the female main character of this one is not annoying and actually uses her brain whenever she is in a difficult situation.

Prince Lagier was a useless idiot who died as a result of a blunder while summoning the demon king. However, the deal requires the demon king to take the prince’s place and grant his goal of ruling over the entire world. Join the demon king and his demon companions as they attempt to finish their assignments before it’s too late.

The art of this manhwa is great and its story is also quite decent. The main character gets reincarnated into a weak body but he becomes stronger very quickly.

He is badass and ruthless and doesn’t forgive any of his enemies. The side characters are also well written and all of them have a certain amount of depth to them.

03. My Three Thousand Years to the Sky

Bai Qiuran was a Qingming Sword Sect student who was regarded as a genius in cultivation, but although all of his comrades had already attained mastery in many realms in a short period of time, he had to spend three thousand years simply learning how to cultivate chi.

This is one of the best cultivation manhwa out there. Its art style is wonderful and the story is also pretty unique. There are a few annoying female characters in this manhwa but the main character is not a simp and doesn’t run after anyone.

He’s overpowered from the start and easily defeats most of his enemies. So, if you are looking for a good cultivation manhwa, you should check this one out.

Kang Hyunmoo was a poor orphan whose ambitions to become a hunter were crushed. Nonetheless, an unknown person once gave Hyunmoo a weird stone that allegedly belonged to his late father.

But it was no ordinary stone, as it transported Hyunmoo to a post-apocalyptic world with hell-level difficulties. Now, he must survive for a set period of time while fighting creatures in order to return to his world.

This is a dungeon and hunter’s manhwa with amazing art and a good storyline. The protagonist turns strong quickly and obtains many powerful skills by killing monsters in the other world. He doesn’t back away from the fight and puts people in their place who try to show off.

01. Survival Story of a Sword King in a Fantasy World

Ryu Han-Bin was a regular person who was summoned to another realm. He was assigned the aim of surviving and growing stronger in this frightening environment full of monsters. To assist him, he obtains a system known as a guideline.

However, his guideline was riddled with mistakes, preventing Han-Bin from levelling up. The art of this manhwa is amazing and its story is also quite good.

The main character is overpowered and defeats most of his enemies without any difficulties. However, he doesn’t show off his powers and uses them only when it is absolutely necessary. The side characters are also well written and the fight scenes are just amazing.

However, the story gets a bit boring in the later chapters but you should give it a try as it was still a pretty good read.

Do you agree with our list of the 10 best manhwa/manhua with badass MC? Tell us your favorite manhwa in the comment below. 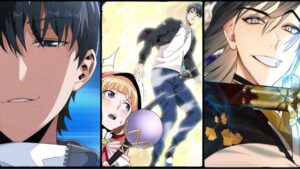 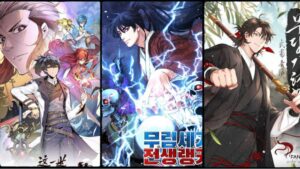 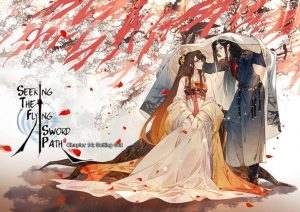