These anime don’t just entertain but also teach viewers about life, relationships, and even the world. We bring you the 10 best slice of life anime of all time that you should watch.

Slice of life anime are often short and sweet but they can pack a punch. They take you on a journey through the lives of a small group of characters, often exploring their interpersonal relationships and common experiences.

Most slice of life anime are light but they can also take on dark themes, such as poverty, loneliness, and failure. They can be funny or serious and often offer an alternative perspective on life and the world around us. Here are the 10 best slice of life anime of all time that everyone should watch.

To start things off, we have an exceptional rather underrated Chinese anime. There is a boy named Tanis who has some pretty messed up parents like they are literally just a couple of mad scientists. They used their own children and experimented upon them far away from the civilization on an abandoned island.

Finally, the couple gets arrested and the siblings are transferred to a new place. Though since they have never had a normal life, they don’t know the first thing about how to interact with society.

Unlike his siblings, Tanis wasn’t genetically modified, so he tries to help his siblings become accustomed to society. Just like that, the Frankenstein Family will now have their slice of what it’s like to live a normal life.

The protagonist is a manga artist named Kakushi Gotou. He is a little self-conscious about his daughter eventually finding out what her father does for a living. I mean he literally puts an office attire before going to his studio and also holds emergency drills with his assistance in case she ever came to his studio.

Aside from this, he is a genuinely good father who cares for his daughter. Not only does he make sure her needs are met he also spends time with her.

But as the saying goes, there are no secrets that time cannot reveal. What would happen when she learns the truth? What is the truth even? Why is he hiding his occupation from his daughter? Well, you’ll have to find out for yourself.

As a manga that was created by the author of Full Metal Alchemist and then adapted by A1 pictures Silver Spoon is quite an experience.

It follows the light and colorful story of a young student as he tries to become accustomed to his new agricultural high school, the guy’s name is Yuugo Hachiken. He is quite a hard worker but still always fails to live up to his parent’s expectations.

However, when the new school year comes, he takes this chance to escape to a boarding school in the Hokkaido countryside. He knew that he would do well there but the man soon realizes he was sorely mistaken. The school has a lot of practical stuff and since his classmates have spent most of their lives on a farm, they are way better than him at everything.

He is a complete newbie but gradually comes to appreciate this new environment as he meets new and unique people. The simplicity of it all is fascinating.

There are times in life when all you need is to relax, be at peace, smile at casual jokes, and appreciate the simple things in life. Well, you do camp is the kind of anime that’ll take you there to that peaceful atmosphere. It’s about five high school girls’ camping adventures, friendships, and jokes they crack along the way.

It does nothing more than what it needs, which is why it’s beautiful. The element of ingenuity is what makes it so great. So, make some coffee and enjoy this one of the best slice of life anime.

My Teen Romantic Comedy SNAFU is a story that follows an anti-social protagonist named Hachiman Hikigaya. To the entire school his existence is trivial. Some don’t even know such a person exists in their class. Naturally, the guy becomes accustomed to it all and ends up with a rather peculiar philosophy.

Youth is a lie and it is evil, or so he says. He writes it down and submits it to the teacher. Though when she reads it, she gets concerned about him and makes him join the volunteer service club. The only other member is the elite Yukino Yukinoshita.

Their initial conversations are awkward, but when the third member joins and the club continues to accept and fulfill requests, their relationship and those around them gradually shift. Hachiman’s rom-com has just begun.

In both the anime and the manga medium, Mushi-Shi holds a prestigious status. The plot essentially revolves around a way of life called Mushi. It is where you just go with the flow. You don’t have any goals or aspirations, and your perspective on what’s good or evil is beyond the sum of their parts.

These Mushi can exist in many forms, from plants to diseases and even natural phenomena like a rainbow. Those who try and understand Mushi are called Mushishi, or in other words, they are Mushi Masters.

The protagonist named Ginko is also a Mushi master. He transverses through the lands, understands Mushi, and helps those who are in need. Mushi-Shi is an awesome slice of life anime and if you haven’t watched this one then do yourself a favor, go and watch this one right now.

Barakamon is that one anime that perfectly embodies everything a well-crafted slice of life is supposed to be. It’s about an interesting protagonist, a clever premise, and a downright exceptional side cast.

The protagonist named Seishuu Handa is a young calligrapher though he also has a few narcissistic tendencies. One day, when a veteran in this field labels his craft as unoriginal, he loses his cool and just punches the guy.

His father sends him to the Goto islands in order for him to self-reflect and gains a new understanding of things. Though his new environment is lively, too lively. Even no one stops barging into his life, and through these interactions, he gradually starts to learn much more about this simple thing called life. It’s a genuinely refreshing and one of the best slice of life anime of all time.

Welcome to N.H.K. is not like your usual animes. The amount of depression in it is inconceivable. The plot is essentially a coming-of-age story on overcoming depression, but the way it is portrayed is incredibly realistic. The element of realism is on steroids.

The protagonist is a 22-year-old dropout who had been a hardcore shun in Nihon Hikikomori Kyokai for four years. Instead of taking responsibility for his behavior, he blames it all on a secret organization that exists only in his head. Though he simply believes that they forced him into his neat status.

Now, will the guy ever be able to face his biggest fear in society?

Space Brothers may very well be the inspiring slice of life anime series you always need. It tells us the story of two brothers, how they vowed to go to the moon when they were young but now in the present day while one has lost his job as a car designer after head-butting the manager.

The younger one is successfully making great strides in achieving his dream. The time when he’ll be standing on the moon is not far away. Meanwhile, the older brother named Mutta keeps questioning his life. He has been reduced to a wage worker.

Though when their mother secretly sends in his application to the Japanese aerospace agency, he is accepted. The man finally embarks on this journey of becoming an astronaut catching up to his brother and then going to the moon.

Yet again, it’s the element of realism that makes this story so profound in the eyes of all who experience it.

Here we have yet another coming-of-age story that centers around an emotionally wounded young man named Rei Kiriyama. He has been through a lot in his childhood, lost his parents, and was adopted by his father’s friend’s family, but his new siblings never saw him as part of their family.

Now in his second year of high school, he is a professional shogi player. His interactions with all kinds of players, the friendships with his teacher, and the family-like atmosphere provided by the three Kawamoto sisters. Rei keeps experiencing all sorts of emotions silently.

Soon enough, his solitary shell begins to crack. Will his emotional scars ever heal? Though this story is not just about him, it’s also about the people involved with him and the missteps have taken along the way. If you are a fan of slice of life anime, then March Comes in Like a Lion is the best slice of life anime of all time that you can watch.

If you are looking for more slice of life anime then you can also visit here. 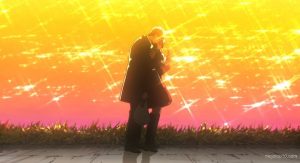