Have you ever watched an anime and felt as if you were watching a real-life romance unfold right before your eyes? If so, then you’ve probably watched a slice of life anime. Slice of life animes are perfect for those who enjoy watching others interact with each other in a natural way. These anime often focus on the characters’ everyday lives rather than on a plot. Here are the 10 best romance slice of life anime for you.

Here are the 10 best romance slice of life anime

Romance is the sweetest genre of all, especially when it comes to anime. Slice-of-life anime, those that focus on the characters’ everyday lives, can also be a great place to find romance — and an even better place to find cute, fluffy moments between the main couple. In this article, we’ll be going over the top ten best romance/slice of life anime to watch, so you can figure out which ones to watch first.

Oh yeah, this feels like that perfect anime to watch after Chunibyo. We’ve got a group of children acting like psychos, what more could you ask? Our MC Riki Naoe has narcolepsy following the tragic deaths of his parents and he likes to shut himself inside his room and stop interacting with society.

But then he meets a guy called Kyousuke, who tells him that it’s finally time to touch some grass. So, Riki decides to join his club called the little busters. What’s the point of this club is to fight evil? At least that’s was the childhood mission. When they’re adults and reunite together, they decide they need more club members.

The melodrama in this show is a love or hate thing, but I can assure you that you are definitely going to love these characters.

What if you have the ability to see the future? Yeah, that’s right. Touko Fukami has the ability to hear voices and see fragments of the future. Wait, are they ripping off Attack on Titan? Nope, because Glasslip is all about Touko chilling in the summer with her friends.

She meets this schoolboy called Kakeru Okikura and it turns out the voices from the future led Kakeru to Touko.

Now, the problem is this show doesn’t exactly explain these future fragments, so if you’re going to watch this show expecting another Stein’s Gate, you should give up hope.

But if you want a slice of life show where our girl and the rest of her friends spend the summer together, then this will be the perfect show for you.

Imagine you’re living your life happily, and then your sister dies and you got to take care of her three daughters. Are you willing to become their father? Are you willing to babysit through all these annoying child dramas and slowly learn the values of a family? Are you going to call Dom for help?

If these are the options you choose, make sure to watch this anime until the very end. Because it shows our main character Yuuta going from who the hell are these kids to listen to me girls, I am your father.

This is one of those less serious shows that still brings out its themes perfectly. Even though it might look less serious from the outside, this show perfectly ties the themes of responsibility and family.

There are two types of slice of life anime, the ones that straight up jump into the tension in mellow drama and the ones that speak a lot with little tension. Convenience Store Boyfriends belongs to the second category.

It involves a group of high schoolers talking about their relationships and the girls they fall for. That’s right. This is the perfect bro talk anime you’ll watch. The main character might be a love him or hate him sort of guy, but you’re definitely going to love the rest of the gang and the good thing about this is how it all happens within a convenience store.

That’s right, no change of scenery. It’s just a couple of boys hanging out in the convenience store having a good bro talk with each other. If you’re a bro, watch this anime.

It’s time for some sports. Yeah, you can still write a great romance anime by adding sports to the story. Want to know how? Watch Chihayafuru which talks about a game called Karuta. If you’ve never heard of that before then feel free to learn Karuta by watching this anime.

Here we have Chihaya Ayase, a girl wandering without ambition until she meets a boy named Arata. Arata sees the potential of Chihaya and teaches her how to become a pro at the Karuta card game. Several years later, Chihaya aims to be the best Karuta player in the world and find Arata the boy who originally taught her the card game.

Even though this looks like a sports anime from the outside, it has some nice slice of life and romance elements from the inside. It shows how to cope with success and failure, and this is one of those few shows that give us an interesting female lead.

This time we have a pianist and a violinist. I know that reminds you of a certain show, but don’t worry, this isn’t depressing as Your Truth in December. This time, we have our guy playing the violin and the girl playing the piano, and as soon as they hear each other’s music, it becomes one of those love at first sight scenarios.

I know the anime title sounds like a special black ops mission but in truth, it’s about a bunch of guys working in an office. That’s right, this is a workplace comedy which means you get no high schoolers. Wagnaria is the name of the family restaurant our main characters work in.

The reason I’m recommending this anime is because of the changed setting. All of us are used to watching high school romance anime, so it’s going to be nice to watch some slice of life workplace romance with crazy chefs and waitresses.

03. Waiting In The Summer

Yes, another summer anime. Why the hell does every slice of life anime happen in the summer? I don’t know. Ask the guy who invented the genre. Waiting In The Summer isn’t about one guy waiting for a girl during summer. It’s the complete opposite. Our main character and his bunch of friends decide to make a film during summer.

Does this mean he’s going to be the next Christopher Nolan? Nope, because this guy has the good old memory issues and it seems we have a love triangle going on.

What I really love about this anime is the art. If you feel like you’ve seen this anime art style before, it’s because these were the guys who animated Anohana. But don’t worry, we don’t have sad ghosts in this anime.

This time we have a Chinese anime movie because why the hell not. Come on, who said romance anime should always originate in Japan. This is honestly one of the best romance movies I’ve watched and even though the general reception for this movie is mixed, I really loved it.

It knows how to blend in some Chinese culture along with the stories of teenagers perfectly. The main theme of the movie is youth. You follow these three characters and their stories while learning about the world around them. It’s pretty clear that this was targeted toward the eastern audience since it speaks a lot about cultural elements only Chinese people would know.

It’s one of those I wish I could go back to that time again stories done right. You might need a box of tissues by the way.

01. Our Love Has Always Been 10 Centimeters Apart

Did this guy actually measure love with a measuring tape? Nope, but it’s one of those symbolic names genius, and yeah we’re moving back to high school again. Why? because this is one of the best high school romance anime I’ve ever watched. We’ve got the popular extrovert who runs the movie club and the shy introvert at the art club.

At first, they’re really good friends but when they’re going to take the relationship a step further with only one year left in high school, these two students need to confess their feelings to each other and close that 10-centimeter gap in their relationship. Yes, it’s that good old, should I confess to him, does she love me sort of dramas done the right way.

But the good news is they might be able to close that 10-centimeter gap real soon. 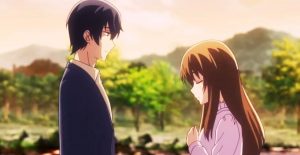 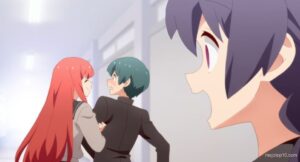 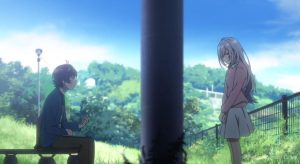 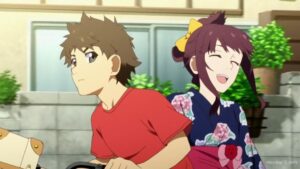