The best demon girl human boy romance anime takes the folklore of demons, angels, and other supernatural beings, along with humans and turn it into something new and exciting. From tales of forbidden love to all-consuming obsession, these anime explore the many facets of the demon genre. These romance anime shatter two world boundaries and give us something new and exciting.

These are the type of romance anime that you can’t seem to get enough of. These stories have all the elements you want in a good demon human romance anime: struggles, intense emotions, forbidden love, and a shocking twist. Here are the 10 best demon girl human boy romance anime.

There are many different types of demon human anime, and each one is different. But to make it really easy for you to find the best demon human romance anime, we’ve compiled ten of the best demon girl human boy romance anime. From the story of forbidden love to the struggles of being a demon, these anime will give you the best feeling. Here are our top 10 picks.

Apparently, anime got tired of giving jobs to demon girls so they decided to make her work in a small electronics store, and it turns out the guy who defeated the demon lord also works in the same shop. What a coincidence, right? Well, this is anime we’re speaking about, so why are you looking so surprised.

The premise is pretty average for a show with a demon at a human, but along the way, you get fan service that pushes all boundaries, so what more do you need. Yusibu also knows how to put a lighthearted tone on everything and even though it makes it look like a less serious show that makes it pretty fun to watch.

Also, if you don’t find the anime when you google the name, remember to type the full name it’s “Yusibu: I Couldn’t Become a Hero, So I Reluctantly Decided to Get a Job,” even without knowing why this title is so long and I really hate light novel authors when they do that.

Remember how people always complain about boys and their harem, this anime puts a fresh spin on the trope and makes it all about a crazy girl in her harem, and the first member to join the harem is a dad who doesn’t know where the hell he was going.

Things even turn worse when the kid comes to the demon lord’s castle and asks teddy, is this little lolly going to be our new mommy? Yeah, the anime is that wholesome.

If that’s your type, then why not give it a watch. Just like Yusibu, the overall tone of this show is pretty lighthearted and you’ve got comedy running all around, so you won’t need any tissue boxes along the way and you’ve got a mystery too, so just keep your eye out for that.

Have you ever thought of a world where catgirls are the heroes and demon girls are the villains? But somehow, some guy in Japan came up with this idea and wrote Omamori Himari. Here we’ve got a demon girl who wants to kill our main character and a catgirl who becomes the bodyguard of this character.

Also, did I mention our main character has cat allergies? I know what you’re thinking oh this is a ripoff of Nyan Koi, but it turns out it is more than that.

We all love romance on the battlefield, right. Now replace your enemies with paranormal spirits and your love interest with a fox spirit and then you’ve got Zakuro.

This anime follows second lieutenant Kei Agemaki’s relationship with the fox spirit Kushimatsu and her four youkai maidens, Zakuro, Susukihotaru, Hoozuki, and Bonbori. Zakuro has mystery and folk tales mixed in as you move through the episodes and it speaks a lot of common themes and tropes while keeping the romance as a subplot.

The overall story here seems to be about fox girls dating military officers but if that feels too weird for you. Still, you can still enjoy the folklore.

Honestly, this anime focuses on the youkai maidens rather than the guys who go to war and come back to enjoy the laps of fox spirits. I’ve definitely put this as one of the best military romances I’ve watched.

If you wonder what the title means, it’s basically about the girl acting like a tsundere and stopping the boy from doing anything.

The anime starts off when our protagonist Ryousuke Kaga meets a beautiful red-headed girl who is standing alone in the rain named Lisara Restall. Who later reveals herself to be a powerful Shinigami. She forms a temporary contract with him to siphon his energy and remain in the mortal world but when the revelation comes that the energy can be refilled only when Ryousuke thinks of certain things.

Over time, their situation gets even more complicated. Now, this anime has a bold ecchi tag labeled right in front of it, so just expect fan service to trump the romance when stuff gets serious.

Come on, don’t look at the animation and be so sad. You guys need to watch classic old anime once in a while. This is really good and if the animation is what throws you off, just bear on and watch it till the end to see how good it is.

The other thing is our guy is already a demon. I know what you’re thinking but the title says it was about demon girls and human boys. What if I say that this boy’s main goal is to transform into a human, why? It turns out he’s actually a three-eyed demon and the very last of his kind.

The girl if not obvious is also a demon and to make things even better, she has a split personality. So, at what moment she might cuddle you and in the next moment she wants to pull out your guts.

04. The Testament of Sister New Devil

Yes, this is Japan’s two favorite entries in one anime, sisters and devils. This tells you the story of Basara Toujou who suddenly gets two new sisters, busty redhead Mio and Maria. Now, having two sisters is not going to be a bad thing, but soon, it is revealed that these two sisters are devils in disguise.

People call this the little sister of High School DxD, so you should know what to expect.

This time we have the whole package vampires, demons, espers, aliens, you name it, and it turns out all the species in this universe wants to fall in love with this guy. Seriously, what do they see in him? He’s like the kid who tries to mind his own business and who somehow has a crush on this green-haired girl. That’s when he realizes the girl with the green hair is actually a vampire, and several moments later, he also realizes this girl looks like a green-haired version of Aqua.

Unlike other anime on this list, the comedy factor isn’t that high but it still knows how to keep you hooked with some mystery. This also feels like that perfect high school anime.

You’ve got girls rejecting guys and regretting it, girls becoming dumber as the anime progresses, and the newspaper reporter finally learning what privacy means.

When Future Diary ended, did you think hey, I wish I saw more anime with girls who act like Yuno Gasai then trust me this is the show for you. You’ve got the perfect Yuno Gasai with blades and red hair. If you don’t care about the Yandere, then you’ll still love the plot. A cupid named Guri writes the name of a normal high schooler named Seiji in her notebook.

Now, if this boy doesn’t kiss anyone, he’ll die very soon. To prevent it, Guri asks Seiji to kiss Akane, the most popular girl in school. Poor Seiji wanted only a normal high school life with a regular girlfriend but sometimes being the unpopular guy doesn’t necessarily mean you’re an unpopular guy among girls as well.

The good thing here is we still get a lot of character development done for our Yandere but she still doesn’t stop giving creepy faces.

No, this is not related to Shingeki no Kyojin. Just because the name has the word attack in it doesn’t mean it’s related to Attack on Titan but instead of titans, we’ve got demons, dragons, and giant medieval armies killing each other in a CGI Gorefest. The world of Rage of Bahamut is divided into two parts.

One part is owned by humans and the other by demons. This was in order to prevent the awakening of a demon beast named Bahamut. Now, nearly 2000 years later, a woman named Amira appears with a god key and now searches for her lost mother. She’s aided by the bounty hunters Favaro Leone and Kaisar Lidfard.

The story may start off as a simple adventure but it soon expands its scope to reveal details about the much larger world and builds it up to an epic conclusion. It also has a very tragic love story, so go with the tissue boxes.

Do you agree with our list of the 10 best demon girl human boy romance anime? Tell us your favorite demon human anime in the comment below. 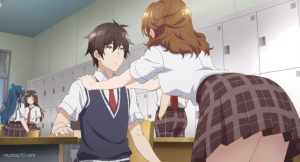 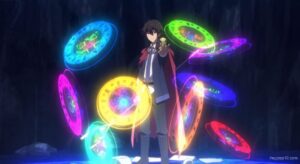 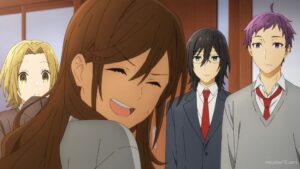